All participants will need to have their audition video approved for Books 5-8, following SAA audition requirements, prior to taking this course

Classes will begin on Tuesday at 8:30 AM, so plan your travel accordingly

Additional information about SAA membership and entrance requirements for Teacher Training units is available at the Suzuki Association of the Americas website: suzukiassociation.org. 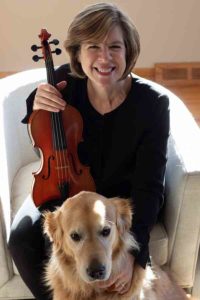 Ann Montzka Smelser began playing violin at the age of 3 with the help of her mother and father, Marilyn and Arthur Montzka. Later she studied under Kazuko Numanami and Sarah Hersh at the Oberlin College Suzuki Program and later with Rebecca Sandrok and Pierre Menard.

In between receiving her Bachelors of Music Education and Masters in Performance and Pedagogue at Northern Illinois University, Ann studied with Dr. Shinichi Suzuki at the Talent Education Institute in Matsumoto, Japan.

After college, Ann toured extensively with the Ruggieri String Quartet to all four corners of the United States through Columbia Artists Management. Ann has performed in many orchestras and chamber ensembles and is currently principal 2nd violinist with Camerata Chicago and concertmaster of the Kishwaukee Symphony Orchestra.

Ann became a Registered Suzuki Teacher Trainer in 2005 and currently teaches Suzuki Pedagogy at both Northwestern University and Northern Illinois University. Ann teaches about 40 private students and is director of the NIU, CSA Suzuki Strings Program at NIU and a teacher at MIC in Winnetka. Ann enjoys working with Suzuki families and teachers at Suzuki Institutes and workshops throughout the United States. Ann was a guest teacher at the 2010 International String Conference in Singapore and has given Teacher Training courses in Lima, Peru, Costa Rica and Mexico City.

Ann lives in DeKalb, IL with her husband, Linc, and her Golden Retriever, Chloe. Linc and Ann are proud Suzuki parents of their daughter, Genevieve, and son, Benjamin, who are currently pursuing music in college.